Steve Piragis went out paddling into the early evening yesterday. His picture reflected some of the most subtle afternoon light we've seen so far this year.  It is hard to believe that November is already upon us.  This poem came to mind.  Enjoy. 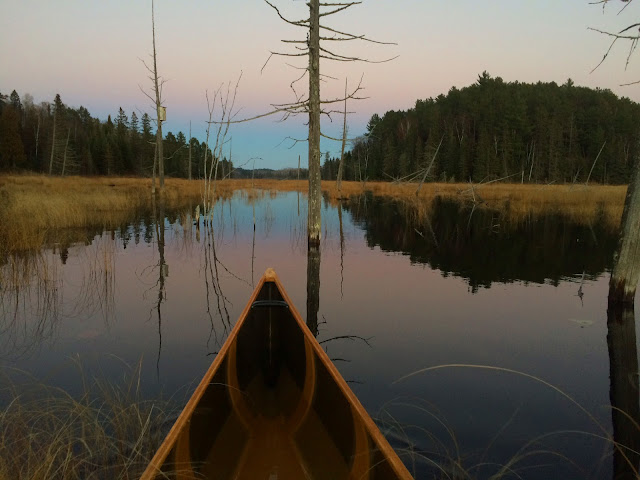 Rising from dark water;
spires climb,
the green trees of years
gone by.  Now like
bannerless flag posts
rooted in the wetland soil.
Sentinels of the lake
silent, watching.

Reaching through gray.
blue and pink toward
the retreating sun.
Arms entreating dead
grasses to join in the dance.

Redwing blackbird
calls from the cattails.
Beaver tail slaps to
the North.  Pileated beak
strikes home and keeps
the beat, hidden in the
dark, jagged line of pines.

The colors deepen.  No
one is home, or,
are they?  Paddle pushes
us into the night.

Posted by Tim Stouffer at 10:57 AM No comments:

Tim Stouffer
I'm the Marketing Director, Catalog Director and Webmaster at Piragis Northwoods Company and the Boundary Waters Catalog here in Ely, Minnesota on the edge of the Boundary Waters Canoe Area Wilderness. We specialize in lightweight canoes and camping gear and have been serving our community and the worldwide community of paddlers since 1979. We know our stuff because we get out there and paddle. We are passionate about canoeing and wilderness.

Save the Boundary Waters: Give to the Max Day November 12th

Ely, MN (November 2, 2015) -- Advocates for preserving the Boundary Waters Canoe Area Wilderness in northeastern Minnesota will be able to double their Give to the Max Day donations to the Campaign to Save the Boundary Waters on November 12. The Campaign, which is a project of Northeastern Minnesotans for Wilderness, has received $77,000 toward its match.

“We are grateful to the community of supporters who continue to raise their voices in support of permanently protecting this amazing canoe country. This year’s Give to Max Day will help us continue a legacy of efforts to protect America’s most visited wilderness area and preserve it for future generations,” said Becky Rom, national campaign chair.

The Campaign to Save the Boundary Waters is a national Campaign dedicated to gaining permanent protection for the Boundary Waters from sulfide-ore copper mining proposed by Twin Metals and other companies. The Campaign has been working to bring this issue to the attention of federal decision makers; grow a large grassroots movement; and educate people about the risks posed by this type of mining.

Last year, with the support of more than 600 donors, the Campaign raised more than $102,000 in combination with a $50,000 matching pledge. This accomplishment earned the Campaign recognition in the top ten of Give MN’s medium category for nonprofits. The Campaign has a $77,000 match this year and hopes to raise a total of $165,000.

Since last year’s Give to the Max Day, the Campaign has continued to grow, taking regular trips to Washington, D.C., to meet with members of Congress and delivering more than 60,000 petition signatures in support of permanent protection for this wilderness. In April, three supporters rode 850 miles on the Bike Tour to Save the Boundary Waters to raise awareness about the issue in communities and campuses from Winona to Ely. On September 23, 2015, Dave and Amy Freeman, 2014 National Geographic Adventurers of the Year, launched A Year in the Wilderness, their latest expedition in support of protecting the Boundary Waters.

Please visit the Northeastern Minnesotans for Wilderness Give to the Max page for the Campaign to Save the Boundary Waters for more information.