It's small and light and perfectly balanced. It can sharpen a pencil to a piercing point, slice a tomato paper thin, and shave the print right off this page.  It will frizz fuzz sticks for tinder, cut fine kindling and split small logs. It will fillet a fish, skin a moose, hack through bone, tenderize a steak, turn pancakes, spread jam and peanut butter, pound tent stakes and chop vegetables.  And it will ride as lightly on your hip as the average hunting knife. No, it's not a secret Air Force survival tool; it's the Gransfors mini belt hatchet!
My first impression of this miniature axe was "It’s cute, but is it practical? “Now, after years of use, I can can say,  "Wow—it performs better—yes better!--than most hatchets twice its size!

The Mini belt axe is the brain child of Swedish black smith, Lennart Petterson who, like his father before him, has worked for Gransfors Bruks his whole life.  Lennart lives in a small house within walking distance of the Axe forge.  He loves the outdoors and is passionate about fly-fishing and ice-fishing.  He also enjoys making knives, some of which have won awards in Sweden.
For years, Lennart dreamed of one compact tool that would function as both knife and axe. It should be light and small and ride safely on the belt, secured by a sturdy leather sheath and safety strap.  It took Lennart two years to perfect and build his dream.  He even desgined the specially shaped handle.The Swedish name for this little axe is Gransfors Lilla Yxa, which means Gransfors Little Hatchet.  But Lennart Petterson calls it my "Instead of my knife hatchet" which, I think is a more descriptive name.

Check the specs below and you'll see that the mini belt hatchet is almost small enough to qualify as a true miniature.  But use it for serious work and you'll discover it's no toy.  Nearly everyone who has seen this little axe reacts the same: first they smile, then they turn it over in their hands, marveling at the rugged whisker-sharp edge and ergonomic (artistic) oiled hickory handle. They nod approval at the hammer-forged marks on the head and the brightly polished poll which functions as a meat tenderizor and "priest" for administering the coup de gras to fresh caught fish.  One hunter observed that the handle appeared to be molded to the head.  "Fits like a custom gun- stock," he said.  Indeed it does!

Here's how the mini belt axe compares to the standard sized ”Wildlife” hatchet:

The mini-belt ax is built like every other Gransfors model—solid!  The high carbon Swedish steel blade is hardened to 57Rc, which is nearly as hard as a good knife, and much harder than most U.S. axes.  It  comes from the factory shaving sharp, and with a good-looking, full-grain (one-eighth inch thick!) riveted leather sheath. These hatchets are extremely difficult to make. Forging the huge hole in the small head requires great skill—akin to forging (not laser-cutting) a knife with a giant cut-out in the center.

The  head is secured to the handle in a unique way:  It is driven in tightly (form fit) until it protrudes about one-eighth inch beyond the head.  Then, a wooden wedge is driven in.  The wedge expands the handle and the part that protrudes, in effect, producing a reverse taper (similar to the handle on a tomahawk).  Then, the two wide metal "cheeks" (lugs) on the head are pounded tightly to the wood.  The result is a metal-to-wood bond that should never come loose.  There's no need for epoxy or metal wedges to make up for sloppy workmanship.
Grasp it lightly just behind the head and you have an Eskimo ulu—one that will chop chicken salad and slice meat and vegetables into wispy strips. It will even cut cheese into reasonably thin slices!

Choke the handle as above but reverse the blade and you have a powerful draw knife that wisks through kindling.  Hack away in the usual manner and it splits wood better than many axes that are twice its weight and size.  The secret is the fine, knife-like edge that tapers progressively to the fairly beefy (0.625") poll—this ain't no simple "wedge grind"!  Note that the end of the  handle is cut at a 45 degree angle ("chopped tail") to facilitate a two-hand hold.  The little axe will slash through large logs fast if you power with both your arms.

It is also a surprisingly effective wood splitter:  I can easily split foot long, six inch diameter rounds by setting the axe head lightly into the end grain, then pounding the head on through with a chunk of log.  Try that with a typical thin-bladed hunter's hatchet!

For go light trips where you don’t need to produce a shedful of firewood each night, the little mini belt ax can’t be beat.

NOTE: Check out the complete line of Gransfors Bruks INC axes in stock at the Boundary Waters Catalog.

Gransfors also makes a number of museum-quality, ancient axes, based upon ax heads found during excavations.  Each axe is hand hammer-forged and duplicated as accurately as possible. I am proud to own the four lugged, 7th Century Chopping ax  pictured below. 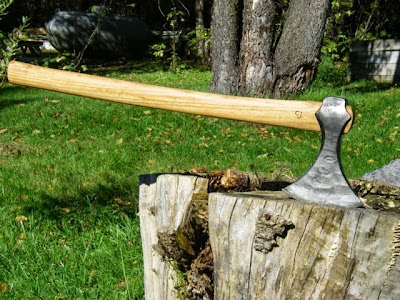 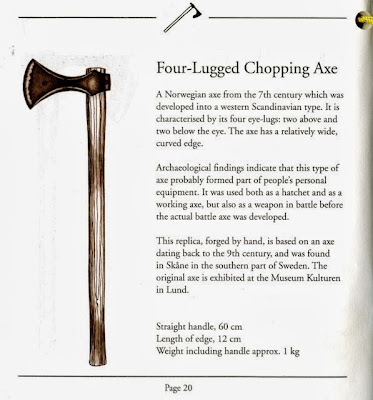 Posted by Unknown at 4:32 PM No comments:

Spyderco folding knives have long been popular with law enforcement, military and rescue personnel.  And for good reasons: They have superb edge geometry; they are constructed from superior steels and are among the toughest, most intelligently designed and best built folding knives available. There’s a model for every purpose—from skinning game to cutting through airplane doors.

Generally, I prefer a fixed blade knife when camping. But when I do carry a folder, my favorite is a “left-handed” Spyderco military model. Naturally, this knife is available in a right-handed version too!

About 90 percent of the population are right-handed. I belong to the ten percent that aren’t.  Most power tools and nearly all firearms are decidedly right-handed: bolts, safeties and loading ports are on the right; autoloaders eject hot empties past my face. It’s a tough life, but we lefties learn to cope.

Open a “one-handed” folding knife with your off hand and you’ll likely find that the thumb cut-out on the handle is too shallow to positively grab your thumb. If there’s a liner-lock, you’ll need to push it with your forefinger or pull it with your thumb. Clumsy, isn’t it?

Thanks to Spyderco, lefties have a dedicated folder to call their own. The C36GLE Military Model Left-Hand is identical to its right-handed brother, the C36G, except for the thumb cut-out and Michael Walker liner lock which have been re-located to work with the left hand. For me, a life-long lefty,  working this blade was a revelation. I wondered, do righties always have things this easy?

The flat-ground, double-tapered blade is four inches long and one-eighth inch thick at the back of the spine. Jimping on the spine and choil add control. The blade steel is Cruicible CPM-530V, a high carbon, chromium alloy known for its toughness. The knife is shipped shaving sharp! The checkered G10 handles provide a firm grip. The knife weighs 4.25 ounces and is three-eights of an inch wide. I clipped it to a pocket and went for a brisk walk. I didn’t notice it at all. I might add that this knife looks formidable when opened—I wouldn’t want to meet one in a dark alley!
So how does it cut?  Split kindling, slice a tomato, chop vegetables, skin a deer, cut cord or bore through a car door—this knife does it all, powerfully and gracefully. The long sweeping belly of the blade, not the tip, does the work on a cutting board. This encourages efficient slicing. Though I generally prefer a fixed blade knife for wilderness use, I wouldn’t hesitate to rely on this Spyderco folder on a bush trip where help is an airplane ride away. It is an awesome knife!

BLOG 55. Tent Stakes and Lines Make a Difference
by Cliff Jacobson
When we canoed the Hood River (Nunavut, Canada) in 1984, an Arctic storm with winds of 60 mph (so said our wind-gauge), kept us confined to our tents for three days.  I remember trying to walk in that wind.  I couldn’t.  There was no way I could fall down if I leaned into the wind.

When, the wind finally subsided we emerged from our tents (Cannondale Aroostooks) and surveyed the damage.  Surprisingly, all three tents were still standing.  Not one had pulled a stake, ripped a stitch or broke a zipper.  Much of the credit of course, goes to the brilliant design of the Aroostook tent, but other factors that saved the day were:

1.   At home, before the trip, we added extra storm lines and stake points to our tents.  My books, “Expedition Canoeing and “Camping’s Top Secrets, 25th Anniversary Ed. provide details.

2.  There's no time to cut storm cords when wind looms large, so I carry a dozen pre-cut 15-20 foot long cords.  Each cord is carefully wound and secured with a quick-release loop. A pull on the quick-release end instantly releases the cord.


3.   Tents were set head-end or quartering into the wind.

4.   Windward storm lines and stake points were double-staked as illustrated below.

The tent stakes you use DO make a difference.  Those short wire “rock stakes” that are popular in the Boundary Waters, are out-of-place on the tundra, in sand and swamp.  The best stakes for soft ground are 12-inch long, hard-tempered aluminum “arrow-shaft” stakes (available from Cooke Custom
Sewing/www.cookecustomsewing.com).  They are expensive and worth it!

Twelve inch aluminum staples (if you can find them) also work well in tundra, sand and soft ground. I bring a variety of stakes on my canoe trips so I’ll have the best one for every type of ground.  My rule is to bring twice as many stakes as my tent needs for routine set-up.  That way, I’ll have extras for storm-proofing, and enough to double-stake windward lines—two stakes per loop, each set at a different angle, doubles the holding power.
When it comes to camping gear, I have pretty much all I want or need.  But I’m always on the lookout for new and better tent stakes.  The tent stakes you use do make a difference!

Cliff Jacobson
www.cliff-jacobson.com
Posted by Unknown at 1:50 PM No comments: