BLOG 50. Book Review: “The Devil’s Grin”, by Toni Harting
Review by Cliff Jacobson
Paddlers who are familiar with Toni Harting’s earlier books, “Shooting Paddlers (photographic Adventures With Canoeists, Kayakers And Rafters)” and “French River: (Canoeing the River of the Stick-Wavers)”, will be surprised by his latest release, “The Devil’s Grin”. Unlike his former books, “The Devil’s Grin” is not about wilderness canoeing or photography: instead, it is the gripping true story of the time that Toni and his family spent as civilian prisoners of war in Japanese concentration camps during World War II.

Background: Toni was was born in in Indonesia in1927 to parents Tine Pons and Anton Harting.  Anton was a highly respected engineer who worked at the Geological Research Department in Bandoeng, Indonesia. The Harting’s enjoyed a happy, healthy life until March, 1942 when the Japanese arrived and imprisoned all the Dutch. Toni was just 16 years old when he and his family were interned in their first camp.  “The Devil’s Grin” details how he and his parents survived starvation, disease and the brutal beatings of the Japanese guards. The book examines the psychology that defined the Japanese mind during the war years—why they were so brutal and why surrender was never an option—and why it was ultimately necessary for the United States to drop the atom bomb(s).

I first met Toni at a canoe show in Canada many years ago. There, I was introduced to his exquisite, award-winning photographs, many of which would eventually find their way into his books.  During our talks about canoeing, Toni shared stories about his teen life in the concentration camps—the frequent beatings, rampant disease, constant starvation, catching rats and snakes (at risk of brutal punishment) to stave off starvation and the growing death toll. Sitting across from Toni with a good Canadian beer in hand, I would never have guessed that this kind-hearted, talented man had endured such hardships. Over the years, I kept hounding Toni to record those events.  Now, he has done so and the resulting book is brilliant.

I start a lot of books that I don’t finish. “The Devil’s Grin” was one I couldn’t put  down! Though Toni is best known for his award-winning photos (one of which was used in the design of a Canada Post stamp), he is an accomplished writer and a thorough researcher. There are no “slow” parts or fluff in this book.  “The Devil’s Grin” is an awesome and enlightening read.

Toni’s blog-spot (http://aharting.blogspot.com) provides details for purchasing the paperback or the free download to your computer or tablet.

A respectful criticism: The scholarly one page synopsis that describes this book does not do the book justice.

Toni Harting passed away on November 26, 2013. He was a great friend of canoeing. We mourn his passing.

Posted by Unknown at 4:52 PM No comments: 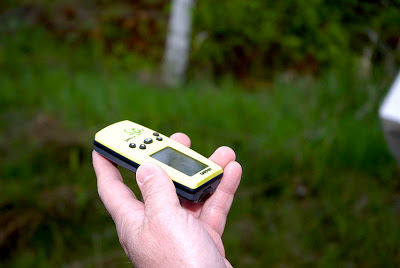 At the outset I should make it clear that I love my GPS.  I bring it on every canoe trip. This said, I ALWAYS carry a compass—two of them, in fact.  Both are Orienteering models; one (a Suunto MC-2) has a declination device and a balanced needle that remains level anywhere in the world; the other is a basic Boy Scout style model. The Suunto is on a lanyard in my pocket; the backup compass is in a pack.

People are buying GPS’s like mad these days, but precious few know how to use them. Some are so hooked on GPS technology that they leave paper maps at home and rely entirely on the little chip-map in the GPS—a dangerous mistake. After all, batteries can die, electronics can go bad; screens can break etc. And contrary to the claims of manufacturers, a “waterproof” GPS will take on water if it’s submerged for very long.  Equally important is that a GPS screen is too small to permit wide-ranging detail.  Of course, you can pan around to see more area, but you won’t see the “big picture”, which is useful for planning the days ahead.  Enlarging the map scale reduces the viewing area; making it smaller limits detail.  That’s why you need a topographic map that shows the entire route!

A knowledge of map and compass navigation is a must before you commit to GPS.  Why? Because it’s easy to make an error when programming GPS waypoints, especially in UTM (Universal Trans Mercator) mode. Unless your GPS has a detailed built-in topo map (the free North American base map provided with the instrument isn’t good enough), with detail equal to a topographic map, you’ll need to hand plot waypoint coordinates, and it’s much easier and more accurate to do this in UTM mode than in latitude/longitude.  (I’ll detail the UTM system in a future blog, or see my books, “Basic Illustrated Map & Compass” or “Expedition Canoeing”).  Without a working knowledge of map and compass, you’re almost certain to get lost if you make a waypoint plotting error.

Most people who own field model GPS’s have only a rudimentary knowledge of navigation. They know the eight principal compass directions, and that “north” is at the top of a map, but little else.  Declination is a mystery, as are the “three north’s” (true, grid, magnetic). Some think that topographic map gridlines point true north and south, which they seldom do.
My friend, Larry Rice, an author and frequent contributor to canoeing magazines, told me he once went on a wilderness canoe trip in northern Canada which was “guided” by a man who supposedly was very experienced.  The man sent the crew an email stating that to reduce weight and bulk everyone should leave their topo maps and GPS at home.  He said that his GPS contained a detailed map of their entire route, and that’s all they would need.

My friend rolled his eyes at this announcement and of course, brought his own map, compass and GPS.  He said that each day the crew would rally around his topo map to discuss the big picture. The leader’s GPS chip-map was simply too small to show an over-view. Ironically, the “leader” could not always accurately pin-point the crew’s location on Larry’s paper map. I hazard to think what might have happened if Larry had taken the email to heart and the leader had lost or damaged his GPS.

Much as I love my GPS, I find that it’s not all that useful on the small lakes that characterize much of the BWCA.  For this, a map and compass gets me around just fine.

I would encourage all to become proficient with map and compass before they commit to a GPS. That way, programming errors will quickly be identified. I might add that detailed GPS maps are not available for many remote areas.  But paper topo maps cover them all.  Overhanging vegetation, canyon walls or heavy cloud cover can prevent an accurate GPS fix.  And on rare occasions (as in 911!) the system is shut down. Unless you drop your compass off a cliff or run over it with a truck, it will always work! And the information on a topo map can never be corrupted.

Technology is wonderful but it cannot replace skills or common sense. Bad stuff happens when one least expects it.  That’s why I always bring two orienteering style compasses, two sets of maps and a GPS on all my northern canoe adventures.