BLOG 64.Water Containers For The Long Haul
by
Cliff Jacobson

I never thought much about long-haul water containers until I started canoeing U.S. rivers.  On my Canadian trips, a liter poly bottle and a folding bucket were enough.  Except on rivers like the Bloodvein (Manitoba) where Giardia is a concern, I never carried a filter or purifier.  Instead, I was careful get my drinking water from clear water sources where contamination was unlikely.

My attitude changed when friends and I began to canoe American rivers.  Here, the choice was to carry our water or purify it.  On desert rivers like the Green, Little Missouri and Rio Grande, we settled the sediment with alum (see Blog #9/Western Water or the 25th Anniversary Ed. of my book, “Camping’s Top Secrets) then purified the effluent.  This procedure worked marvelously.
But contaminated and brackish water defies treatment.  Here, you must haul your drinking water—and in the Everglades, you may have to defend it from thirsty raccoons and voracious rats which will bite through plastic containers.  I’m constantly on the prowl for better water jugs.  Here are my requirements:

·      The container must be positively leak-proof.
·      The cap must have a leash to prevent loss.
·      It must fit seamlessly into my Bell Yellowstone solo canoe.  Some otherwise great containers won’t!
·      The handle must be secure and unbreakable.
·      Water is precious—small amounts must pour easily without spilling.
·      The jug must have a wide, quick-fill cap.

SOME FAVORITE WATER CONTAINERS
NALGENE BOTTLES
For personal use, I’m won over to Nalgene bottles, which come in a variety of sizes and shapes.  I discovered these tough-as-nails poly bottles when I taught high school biology in the mid-1960’s.  Most of the chemicals we used in class came packaged in Nalgene bottles.  The bottles never leaked no matter how rough they were handled.  When the chemicals were gone, I washed out the bottles and  used them on my canoe trips. I still have some 1960’s originals. When Nalge learned that their bottles were popular with outdoors people they responded with new designs and colors. Today, Nalgene bottles have lots of competition but in my opinion they are still the best.

MSR DROMEDARY BAGS
These beautifully made black fabric bags come in a variety of sizes.  They are lightweight, watertight and tough.  There’s a wide-mouth, quick-fill cap and a small, canteen-style mouthpiece.  A heavy-duty nylon ribbon that runs through grommets along the perimeter provides a handle and options for hanging.  These bags sit low in the canoe and take up little space.  Unlike high, cubical style containers, water doesn’t slosh around as you paddle. This is the bag of choice if you paddle a solo canoe or kayak where space is tight.  If you’re going where sharp-toothed critters will attack soft-sided water bags, you’d best secure them inside stainless steel Outsak bags (http://www.simpleoutdoorstore.com) or Kevlar Ursa sacks (www.ursack.com.)
NRS FIVE (5.3) GALLON WATER JUGS
The NRS 5 gallon jugs appear identical to the combat proven water jugs used by the government and military.  At a bit over 5 pounds empty, these babies are heavy, but unless you purposefully hammer a nail through the side, you’ll never puncture them. And sharp-toothed varmints can’t bite through the thick plastic.  There’s a wide fill and small pour cap The caps are leashed and absolutely secure.  At around 50 dollars apiece, they aren’t cheap, but you’ll be thrilled with the quality and ease-of-use.  Two of these containers will fit in my Bell Yellowstone solo canoe.

Cliff Jacobson
www.cliff-jacobson.com
Posted by Unknown at 11:57 AM No comments:

BLOG 63. Some Advice For Group Leaders

BLOG 63.  SOME ADVICE FOR GROUP LEADERS
by Cliff Jacobson 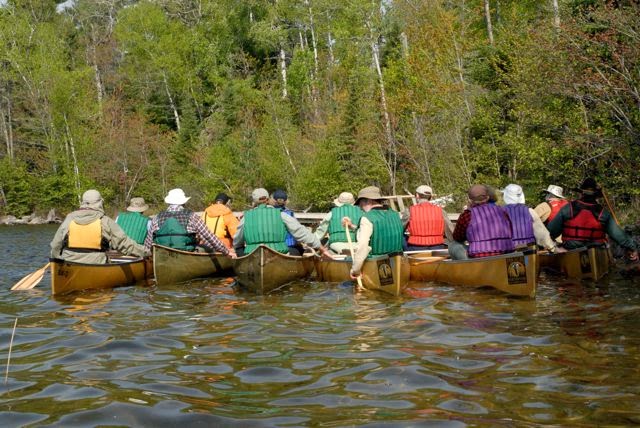 A bright summer morning on any river.  A crowd of canoers prepare for a downstream float.  It's 9:30 a.m. and confusion abounds.  "Weren't we supposed to shuttle at 9?" someone asks.  What! You say the shuttle's gone?  I didn't hear any announcement. How'm I gonna get my car to Reedsville landing?"
Between the mix of uncertainty and lack of communication, there is misunderstanding of the day's events.
"They say we'll be done by four."
"Better be!  Gotta be home by five.  We shoulda left an hour ago.  Where is Robertson (the leader) anyway?"
Finally, the shuttle is done and the pack moves to the water’s edge.  Left behind are soft drink cans, candy wrappers and styrofoam cups.
Once on the river, the fun begins.  The kids have their ghetto blasters, and some of the adults have beer. Lots of beer! Invariably, you can get one for the asking.
Round the bend is an easy rapid, but for the drinkers it's already a four beer day.  Suddenly, there's a capsize.  Everyone is quickly rescued—but wait.  "Where's the beer?  You mean we lost the whole case?
A noon lunch is planned, but the undulating mass doesn't reach the appointed spot till two. When the drag canoe finally arrives, the lead boat has already left. The paddlers build a hasty fire, wolf down some charred weiners then beat a hasty retreat back to the canoe. On the run, they kick sand over the determined flames. Is the fire out?  Who knows? They never looked back! 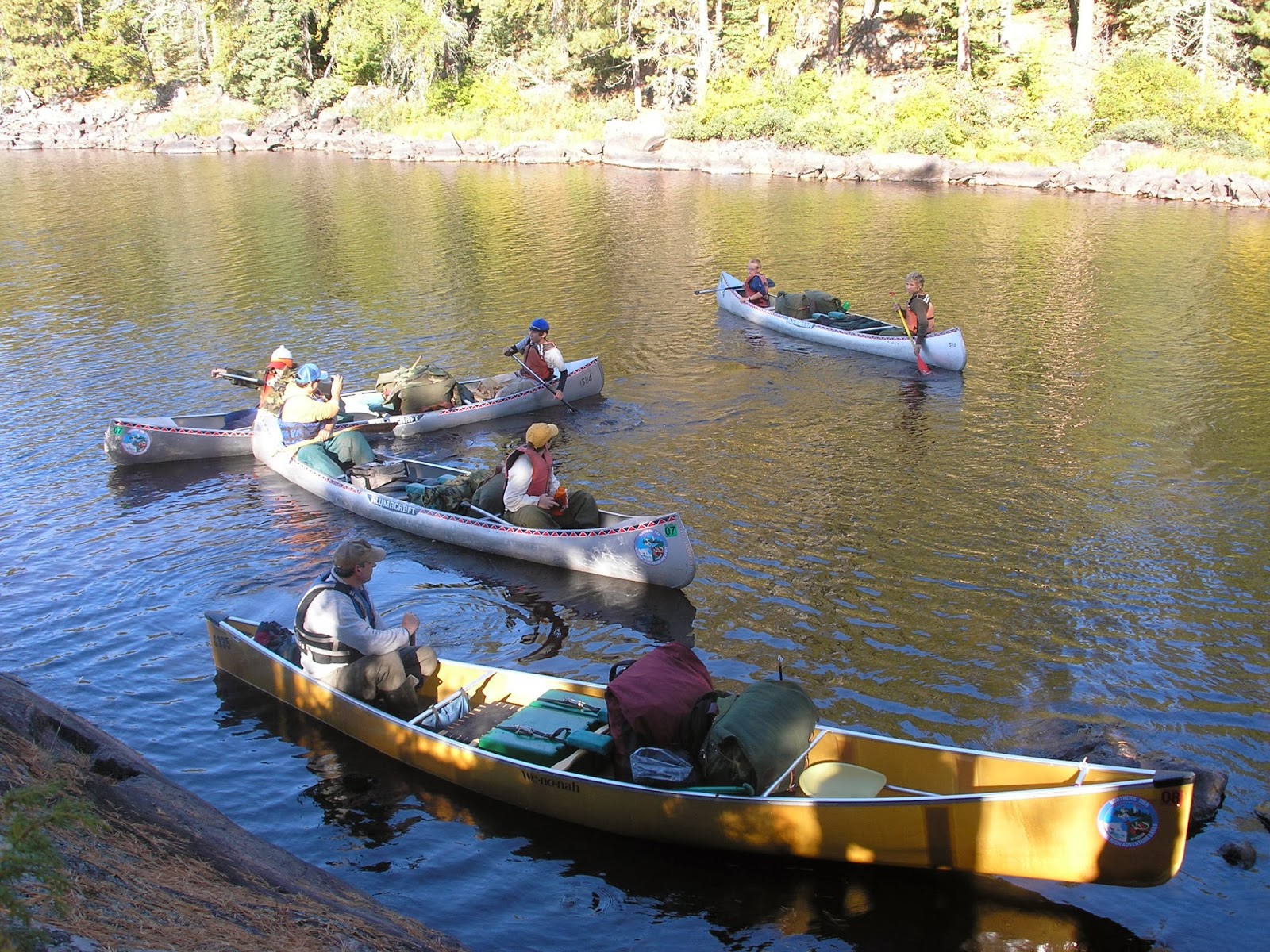 Around three o'clock, a persistent head wind develops and the canoes spread out further.  The gap widens as those in pusher aluminum and Royalex canoes fall behind.  With knowing smiles, Robertson takes the lead in his quick Kevlar cruiser. "We'll teach you slugs what "efficient" canoeing is all about!
The lead canoes reach the take out at 4:06, as planned.  Two hours later the last boats arrive.  Sorry guys, the last car's been shuttled.
You’re probably thinking: "good story, Cliff, considering you made it up." But I didn't.  Not one word. I have, however, changed the names to protect the guilty.
Environmental neglect is more often a matter of insensitivity than illegality.  Since the group "leader" is the one who sets the tone, let's discuss him or her first.

The leader:  The problem is, most groups don't have one. Too often, the one who plays the part is inexperienced and disorganized.  Show me a group with a good leader and I'll show you ethical behavior on the river.
Here are the tenets of good leaderhsip:
1.    The leader leads.  No one passes the leader.  Ever!
2.    The most experienced canoeist (next to the leader) paddles "drag".  The drag canoe never passes anyone. Rest stops are timed from the arrival of the drag--not the lead--canoe.
3.    The end-of-trip shuttle does not begin until the last canoe touches shore!
4.    Each canoe keeps visual contact with the canoe BEHIND it. Rationale: It's easy to drop back but hard to push ahead and catch a fast team.
5.     Emergency equipment (first-aid kit, fire-starters, etc.) is carried in both lead and drag canoes.
6.    In a capsize, nearby canoes rescue the swimmers first, canoe and gear second.
7.    The group leader should make the nature of the trip (slow float, fast cruise, whitewater, etc.) clear before the trip.
8.    Everyone gets a list of essential equipment and "do's and don'ts", in advance of the trip.
Here are my expectations:
1. No radios, music blasters or cell phone calls.
2. Those who don't have essential items (a PFD, plus appropriate clothing  and rain gear) don’t go.
3. Wear your life jacket! This does not mean "have it available”.  Take off your PFD on a well run club outing and you'll hear about it!
4. Shuttle: Everyone wants his car at the take-out so he can get home quickly.   Those who volunteer to taxi their friends back to the put-in are greatly appreciated!
5. Beer: It's okay to have a beer with lunch, providing you carry out the can.  However, continuous sipping on the river is frowned upon.
6. Garbage: You brought it in, you pack it out!  A plastic trash bag tied to to a canoe thwart is a non-intimidating way to educate others.
7. Human waste: Bury waste away from water, and burn the toilet paper.  Douse the flames with water. Cover the hole with dirt.  Or, use a sanitary “toilet bag” system (Biffy Bag, Clearwaste, etc.).
8. Cruising speed. There is always a fast team who wants to show off and an inexperienced one who lags behind--a scenario that can produce a chain of canoes miles long.  It is impossible to maintain control over a fleet that's spread out.  So, spell out the requirements of the cruise before you set out.
9. Smoking: smokers please smoke away from the crowd.  And, field-strip your cigarettes.
10. Don't play dodge-'em with your canoe.  If you want to see fur fly, crash into (indeed, just nick!) someone's $2,600 Kevlar canoe with a rental tank. Boy, are you in for a surprise!
11. Packing your gear: Everything should be packed in waterproof containers that float.
I could continue, but these are the basic concerns--all of which may be summarized by two simple cliches: "Take only pictures, leave only footprints."  And respect the rights of others.